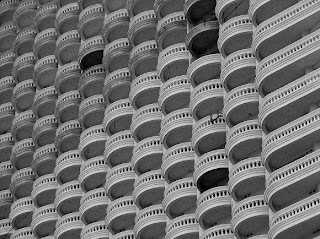 During the Thai tiger economy of the 1990's, skyscrapers grew all over Bangkok in a display of Thailand's new-found economic prominence. This one never completely grew up. Crows circle the pinnacle and rats call its lower levels home. Locals, convinced its hallways are haunted, stay out of the ghostscraper. Expat urban spelunkers have explored the building and returned to Khao San Road with stories from its upper reaches. The verdict: it is a dilapidated mess. The future of the Sathorn Unique remains unclear but perhaps someday it will be finished. For now, it looms on the Bangkok skyline with many other abandoned skeletal structures. It has been abandoned since 1997.
Posted by Anonymous at 1:30 AM