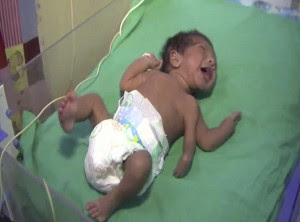 Polymelia is a birth defect involving limbs, in which the affected individual has more than the usual number of limbs. In humans and most land-dwelling animals, this means having five or more limbs. The extra limb is most commonly shrunken and/or deformed. Lakshmi was a child born in India, she is accepted as Hindu Goddess in India having multiple limbs.

The causes may be several. Sometimes an embryo starts as conjoined twins, but one twin degenerated completely except for one or more limbs, which end up attached to the other twin. Sometimes small extra legs between the normal legs are caused by the body axis forking
Posted by Saj at 1:30 AM