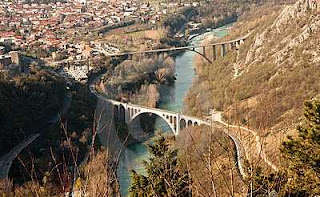 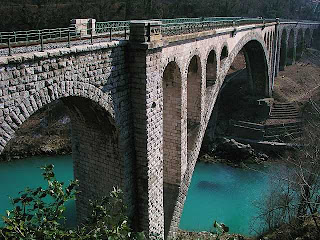 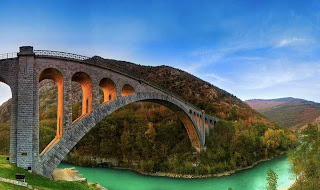 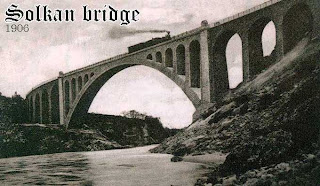 Solkan Bridge is a 220-metre long stone bridge over the river Soča near Nova Gorica in western Slovenia. With an arch span of 85 metres it is the second longest stone arch in the world and the longest stone arch among train bridges. It was built in the time of the Secession, between 1900 and 1906. The bridge was designed by R. Jaussner and L. Oerley, at first with 80-metre long stone arch.

Between 1904 and 1905 the bridge was built by construction company Brueder Redlich und Berger from Vienna. In the spring of 1904 builders had to change the project because of the lightweight soil and increase the arch to 85 meters. It is built of 4533 stone blocks. On July 19, 1906, the railway from Jesenice to Gorizia was completed and the Austrian heir Franz Ferdinand travelled across the bridge. In 1916, during the first world war, the Austrians destroyed the bridge as they left Solkan, so that the invading forces couldn't use it. After the war the Italians first built a steel construction where the bridge once stood and in April 1925 started to build a new bridge, which was finished in 1927. This bridge was very similar to the first one, with the exception of having only four sub-arches instead of the original five. During the second world war the bridge suffered only minimal damage from bomb attacks, which the Germans repaired in a few days. Solkan bridge is the last stone bridge constructed in the world, because the first large concrete bridges were already on the horizon
Posted by Anonymous at 1:30 AM