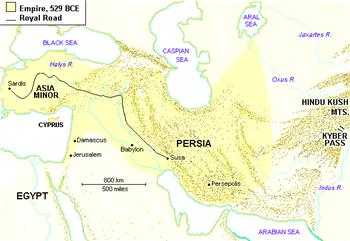 The Persian Royal Road was an ancient highway reorganized and rebuilt by the Persian king Darius the Great (Darius I) of the Achaemenid Empire in the 5th century BC.This road must be very old. If the Persians had built this road and had taken the shortest route, they would have chosen a different track: from Susa toBabylon, along the Euphrates to the capital of Cilicia, Tarsus, and from there to Lydia. This was not only shorter, but had the additional advantage of passing along the sea, where it was possible to trade goods. The route along the Tigris, however, lead through the heartland of the ancient Assyriankingdom. It is likely, therefore, that the road was planned and organized by the Assyrian kings to connect their capital Nineveh with Susa. Important towns like Arbela and Opis were situated on the road
Posted by Anonymous at 1:30 AM