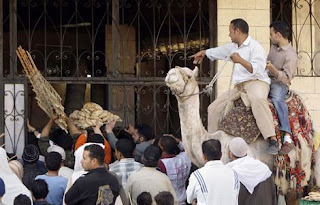 From January 18-19 of 1977, Egyptian Bread Riots took over most of the largest cities in Egypt. There wasn’t much evidence that would have lead anyone to believe that the lower class people were planning to riot. Of course, not all riots can be spotted before they really form, and this is just one example. However, it was pretty obvious that the economic reforms Anwar El Sadat was making weren’t going to make those in the lower class pleased.

In 1974, president of Egypt, Anwar El Sadat, moved his focus towards economic change in the country. He wanted to adopt an open-door policy, otherwise known as Infitah, which would help to greatly encourage domestic as well as foreign investment. However, this was a huge change for Egypt, as the previous president, Gamal Abdel Nasser, had a completely opposite goal, which ultimately led the economy in route to no private investment and nationalizations. With a new president in place, Sadat was really looking to become closer with the U.S. and completely rid of positive neutralism so that the country’s economy would attract more foreign investors. The conflict began when Sadat took loans from the World Bank to provide subsidies, including food. In 1977 it was announced that the government planned to cancel $30 million in subsidies, especially on food. Bonuses and pay rises were also cancelled.

Because of these cancellations, people throughout Egypt were mad. Many who worked in factories or for the country’s state government walked out of work and rushed into the cities to participate in demonstrations. People from all over, including Cairo and Alexandria joined the fight to get rid of these new laws and cancellations. Citizens began burning buildings, cutting railway lines, and blocking trains from leaving. The riots were ended after the army was deployed to control the crowd and restore peace and order. However, the government decided to cancel the new policies that were in place. This pleased the crowd and the rioting did eventually stop. In all 800 people died in the riot
Posted by Anonymous at 1:30 AM