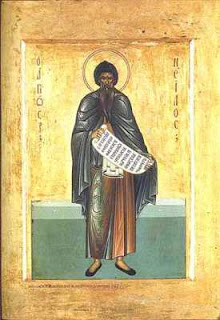 St Nilus was a 5th century ascetic monk who was a disciple of St John Chrysostom (a doctor of the Church). He made a prophecy (though some dispute it dates from his time) relating to the 20th century which is striking in its foresight. Here are a few particularly pertinent sections of the prophesy – the last phrase is particularly interesting:

After the year 1900, toward the middle of the 20th century, the people of that time will become unrecognizable. When the time for the Advent of the Antichrist approaches, people’s minds will grow cloudy from carnal passions, and dishonor and lawlessness will grow stronger. Then the world will become unrecognizable. [...] People’s appearances will change, and it will be impossible to distinguish men from women due to their shamelessness in dress and style of hair. [...] At that time the morals and traditions of Christians and of the Church will change. People will abandon modesty, and dissipation will reign. Falsehood and greed will attain great proportions, and woe to those who pile up treasures. Lust, adultery, homosexuality, secret deeds and murder will rule in society. [...] At that time men will also fly through the air like birds and descend to the bottom of the sea like fish. And when they have achieved all this, these unhappy people will spend their lives in comfort without knowing, poor souls, that it is deceit of the Antichrist
Posted by Anonymous at 1:30 AM