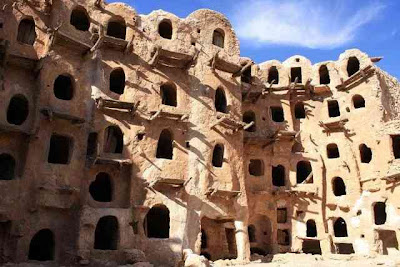 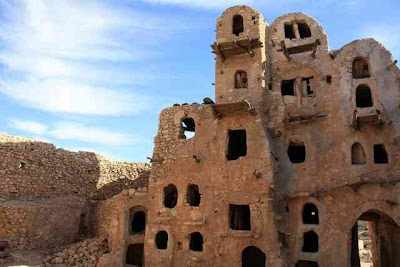 Kabaw located 250 km from Tripoli, the capital of Libya, is a 1,100-year-old town located in Sub-Saharan Libya in North Africa. It is a Berber settlement situated atop the Nafusa mountain range. The settlement is located on undulating terrain, with the highest peak topped by a granary. The town surrounds the granary as well as protects it from invaders. The need, as well as scarcity, of food was the prime reason for placing the granary in a strategic place.
Kabaw's granary is probably the world's truest form of a 'democratic institution', because of the inclusiveness and functioning of the granary and the way it is articulated in its architectural form.
The inward-looking circular form of the granary was used to store extra food for the months ahead, like grains from the harvest, olives and oil, palm dates and salt. To store the food the semi-circular form was punctured in a honeycomb pattern and chambers were formed. Each chamber belonged to one family. The chambers were provided with doorways and a lock, which allowed each family to store and protect its surplus food. A mixture of locally available stone, gypsum and red mud was used as a construction material. The roof was made of locally grown palm trees and olive branches covered with a waterproof mud layer.
The chamber in the granary was not only a food storing element; it also emphasized each family's/individual's share and representation in the town's overall food economy. The inclusiveness in the functioning is also reflective in architectural form. Unlike forts and palaces, the semi-circular form of the granary was engaging and not overpowering. The use of materials and construction techniques were contextual and user-friendly.
Posted by Saj at 1:30 AM