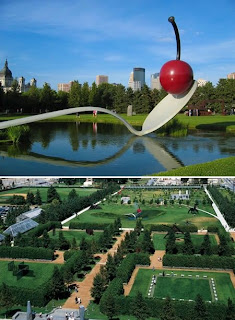 The Minneapolis Sculpture Garden is one of Minnesota's crown jewels and its centerpiece, the Spoonbridge and Cherry, has become a Minnesota icon. Claes Oldenburg best known for his ingenious, oversized renditions of ordinary objects, and Coosje van Bruggen, his wife and collaborator, had already created a number of large-scale public sculptures, including the Batcolumn in Chicago, when they were asked to design a fountain-sculpture for the planned Minneapolis Sculpture Garden. The spoon had appeared as a motif in a number of Oldenburg's drawings and plans over the years, inspired by a novelty item (a spoon resting on a glob of fake chocolate) he had acquired in 1962. Eventually the utensil emerged--in humorously gigantic scale--as the theme of the Minneapolis project. Van Bruggen contributed the cherry as a playful reference to the Garden's formal geometry, which reminded her of Versailles and the exaggerated dining etiquette Louis XIV imposed there
Posted by Anonymous at 1:30 AM