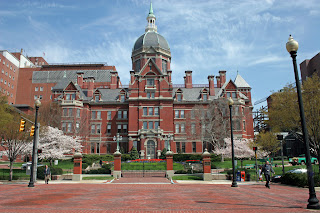 Johns Hopkins Medicine employs more than 10,000 people across our hospital campuses and other health care entities around Maryland.The Johns Hopkins Hospital is widely regarded as one of the world’s greatest hospitals.It has been ranked by U.S. News and World Report as the best overall hospital in America for 21 consecutive years.The hospital’s main medical campus in East Baltimore is served by the easternmost station on the Baltimore Metro Subway.Medical achievements at Johns Hopkins include the first male-to-female sex reassignment surgery in the United States that took place in 1966 at the Hopkins Gender Identity Clinic.Two of the most far-reaching advances in medicine during the last 25 years were also made at Hopkins. First, the Nobel Prize-winning discovery of restriction enzymes gave birth to the genetic engineering industry. Second, the discovery of the brain’s natural opiates has triggered an explosion of interest in neurotransmitter pathways and functions. Other accomplishments include the development of HeLa, the first and arguably most important line of human cells grown in culture; identification of the three types of polio virus; and the first “blue baby” operation, which opened the way to modern heart surgery
Posted by Anonymous at 1:30 AM