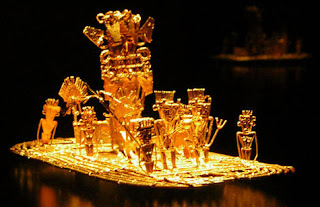 One of the most famous of all the legendary cities, El Dorado was a mythical empire supposedly found in the jungles of South America. Literally meaning “The Golden One” in Spanish, the city was said to be led by a powerful king and hold untold riches of gold and jewels. In the time of the conquistadors, the city was a subject of constant fascination, and several disastrous expeditions were launched in search of it. The most famous of these was headed by Gonzalo Pizarro, who in 1541 led a group of 300 soldiers and several thousand Indians into the jungle in search of El Dorado. They uncovered no evidence of the city or its treasures, and after the group was decimated by disease, famine, and attacks by natives, the expedition was abandoned. This model is on display in the Gold Museum, Bogotá, Colombia
Posted by Anonymous at 1:30 AM