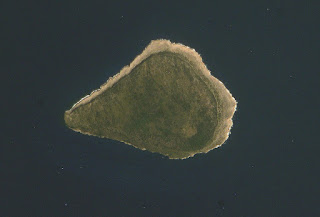 Navassa is a small, uninhabited, and isolated oceanic island located in the Windward Passage approximately 55 km west of the southwestern tip of Haiti .This uninhabited island was claimed by the U.S. in 1857 for its guano, and mining took place between 1865 and 1898.

Wildfires have destroyed some habitats for nesting seabirds and migratory song birds. These fires, in part, may have been caused by squatters seeking to clear land in order to plant food crops. Because of the island’s remoteness, existing protective regulations are not enforced. Navassa lacks beaches and mangrove forests.

There were 8 species of native reptiles, all of which are believed to be, or to have been,endemic to Navassa Island: Celestus badius (an anguid lizards), Aristelliger cochranae (agecko), Sphaerodactylus becki (a gecko), Anolis longiceps (an anole), Cyclura (cornuta) onchiopsis (a rock iguana), Leiocephalus eremitus (a curly-tailed lizard), Tropidophis bucculentus (a dwarf boa), and Typhlops sulcatus (a tiny snake).Transient Haitian fishermen and others camp on the island but the island is otherwise uninhabited.It has no ports or harbors, only offshore anchorages, and its only natural resource is guano; economic activity consists of subsistence fishing and commercial trawling activities.
Posted by Anonymous at 1:30 AM