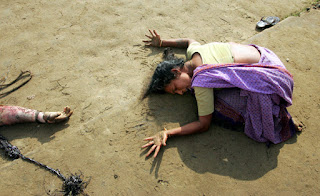 One of the most representative and striking photos of the aftermath of the Indian Ocean tsunami was taken by Reuters photographer Arko Datta in Tamil Nadu. He won the World Press Photo competition of 2004. Kathy Ryan, jury member and picture editor of The New York Times Magazine, characterized Datta’s image as a “graphic, historical and starkly emotional picture.”

“After the Tsunami” illustrates an Indian woman lying on the sand with her arms outstretched, mourning a dead family member. Her relative was killed by one of the deadliest natural disasters that we have ever seen: the Indian Ocean tsunami.
Posted by Anonymous at 1:30 AM