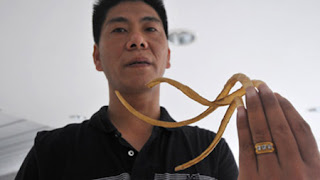 A man in China has been growing the nails on his left hand for 13 years – to help him control his temper.Wen Jian, 41, of Changle, Fujian province, says he was always getting into fights before he grew his nails.His longest nail is 35cm (14ins) long and prevents him from making his hand into a fist, reports Fuzhou News.But his long nails have also brought Wen some inconveniences – he has to keep his left hand in a shoe box each night to prevent him from breaking off the nails in his sleep
Posted by Anonymous at 1:30 AM