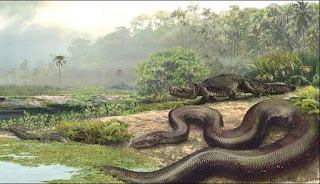 Titanoboa was 13m (42ft) long - about the length of a bus - and lived in the rainforest of north-east Colombia 58-60 million years ago.
The snake was so wide it would have reached up to a person's hips, say researchers, who have estimated that it weighed more than a tonne.

Reticulated pythons - the world's longest snakes - can reach up to 10m (32ft).

The team of researchers led by Jason Head, from the University of Toronto at Mississauga, Canada, used a known mathematical relationship between the size of vertebrae and the length of the body in living snakes to estimate the size of the ancient animal.

Named Titanoboa cerrejonensis by its discoverers, the beast's 13m-long body and 1,140kg (2,500lb) weight make it the largest snake on record.


"At its greatest width, the snake would have come up to about your hips. The size is pretty amazing," said co-author P David Polly, from Indiana University in Bloomington, US.

Researchers discovered fossilised bones belonging to the super-sized slitherers and their possible prey at Cerrejon, one of the world's largest open-pit coal mines. The animal is a relative of modern boa constrictors.

"Probably like an anaconda, it spent a lot of time in the water," said Professor Polly.

"It would have needed to eat a lot.

"What its prey was exactly, we don't know. But it probably included alligators, big fish or crocodiles."

The researchers also used the reptile's size to make an estimate of Earth's temperature 58 to 60 million years ago in tropical South America.

Palaeontologists have long known that as temperatures go up and down over geological time, generally speaking, so does the upper size limit of cold-blooded creatures - or poikilotherms.

This is because the metabolism of a poikilotherm is more or less controlled by the average temperature of its environment.

Assuming the Earth today was not particularly unusual, the researchers calculated that a snake of Titanoboa's size would have required an average annual temperature of 30C to 34C (86F to 93F) to survive.

By comparison, the average yearly temperature of today's Cartagena, a Colombian coastal city, is about 28C.
Posted by Anonymous at 1:30 AM