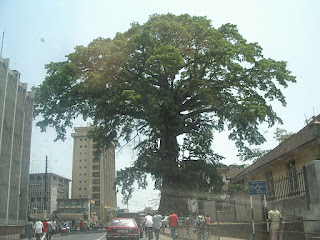 The Cotton Tree is an historic symbol of Freetown, the capital city of Sierra Leone. According to legend, the “Cotton Tree” gained importance in 1792 when a group of former African American slaves, who had gained their freedom by fighting for the British during the American War of Independence, settled the site of modern Freetown. The Cotton Tree is a rapidly growing deciduous tree that reaches heights of 80 feet or more, and a diameter of five to eight feet above its buttresses. The buttresses themselves can be up to ten feet tall and extend ten feet from the main trunk. The tree has a broad, flat crown of horizontal branches. The leaves are compound with five to eight lance-shaped leaflets that are three to eight inches long.

The tree produces three-to-six-inch long, elliptical fruits. These fruits contain many seeds surrounded by a dense mat of cottony fibers. The tree gets its common name from these fibers which rain from the tree when the fruits ripen. The fibers are almost pure cellulose, buoyant, impervious to water, and have a low thermal conductivity, but they do not lend themselves to spinning. Called Kapok in Asia, the fibers are used for insulation, padding in sleping bags and life preservers, and for stuffing mattresses and pillows. In Puerto Rico the tree was often planted in the center of plazas for shade, and it is considered a valuable honey tree.
Posted by Anonymous at 1:30 AM