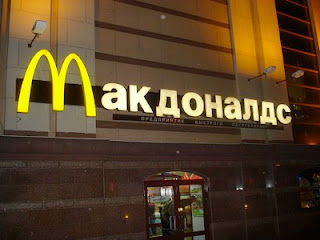 There was a fact that no two countries with McDonald’s franchises have ever gone to war. This theory was proposed by Thomas Friedman and became massively popular all around the world. It was used to show that countries loving democracy (those most likely to have a McDonald’s franchise) have lived peacefully together due to the merits of that political system (this is also called the Democratic Peace Theory and the Golden Arches Theory of Conflict Resolution). Friedman proposed it in his book The Lexus and the Olive Tree. So, is it true? No. Georgia and Russia were recently at war with each other and both have McDonald’s. Furthermore, Israel and Lebanon also defy the theory for their conflict in 2006, and right after the book was published, NATO bombed Serbia – again disproving the idea.
Posted by Anonymous at 1:30 AM