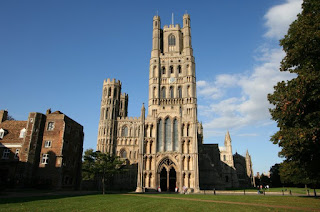 Ely Cathedral in Cambridgeshire is a magnificent medieval cathedral with a number of unique characteristics. Most of the present building was completed by 1189 in the Romanesque style, with some additions made in the 13th and 14th centuries.

Ely (pronounced “eely”) was an island for most of its history, until the marshy Fens surrounding it were drained in the 18th century. The great cathedral of Ely, which still appears to float high above the flat surrounding landscape, has long been known as “the Ship of the Fens.”

The foundations for this spectacular stone church, set amid poppy fields in the countryside outside of Cambridge, were laid by Benedictine monks in the 11th century. But for hundreds of years prior, the site lured religious pilgrims to visit the shrine of Etheldreda, a Saxon princess who left her husband to pursue a religious life. Etheldreda established a monastery here in the 7th century and is said to have planted a staff in the ground that then blossomed into a tree overnight — a miracle that led people to believe she was a saint. For hundreds of years after, pilgrims made their way to a shrine to Etheldreda inside the cathedral; a plaque now marks where the shrine once stood. Today, the church is best known as a shining example of Norman architecture, marking the Romanesque style’s arrival in Britain (the cathedral’s nave and south transept are considered perfect Norman examples).
Posted by Anonymous at 1:30 AM