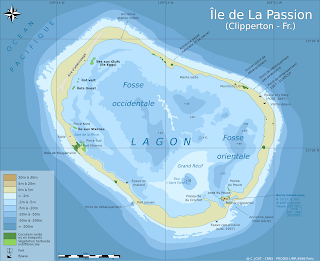 Clipperton Island is a small, ring-shaped atoll located 1,120 km southwest of Mexico in the Pacific Ocean. It has no permanent residents and is mainly visited by Mexican fishermen and French Navy patrols.

Clipperton Island was originally discovered by Ferdinand Magellan in 1521, but was later named after John Clipperton, an English pirate who led a mutiny against William Dampier in 1704. It has been rumored that Clipperton hid some treasures on the atoll.By 1915, most of the inhabitants had died, and the last settlers wanted to leave on the American war ship ‘Lexington’ which had reached the atoll in late 1915. However, the Mexican military Governor declared that evacuation was not necessary. By 1917, most of the men had died and only the ligthhouse keeper was living along with 15 women on the island. In July 1917, three women were the only ones alive and were picked up by the American ship ‘Yorktown’.

The only land animals known to exist on Clipperton Island are bright orange crabs (which are poisonous to consume),birds, lizards and rats, the last of which seem to have arrived from recently wrecked ships.Bird species include White Terns, Masked Boobies, Sooty Terns,Brown Boobies, Brown Noddies, Black Noddies, Greater Frigates, Coots, Martins, Cuckoos and Yellow Warblers. Ducks have been reported in the lagoon.
Posted by Anonymous at 1:30 AM