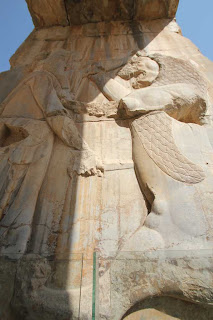 More commonly known as Persepolis, it is located in the south of Iran and was the capital of the Achaemenid Empire. Construction was started around 515BC by Cyrus the Great, but the most impressive works were completed by Darius the Great and Xerxes the Great in around 470BC. One of the most awe inspiring structures on this site is the Apadana palace which was the main hall of the kings, where the tributes from nations within his Empire would have been received. The building was supported by columns 20m high, topped with a brace carved to the shape of lions or bulls. I have seen an example of these braces in the Louvre and it gives you an amazing idea of the size and scale of Persepolis. The site also contains the gate of nations, the hall of 100 columns, the imperial treasury, council halls, military quarters, reception halls, cisterns, drainage, sepulchers, royal tombs, royal stables, chariot houses and a number of palaces and royal residences, all covered in engravings and mosaics. The city was destroyed in 330BC, by Alexander the Great, possibly in revenge for the destruction of the acropolis in Athens, but the ruins still contain many beautiful carvings and are testament to the wealth and power of the Persian empire.
Posted by Anonymous at 1:30 AM