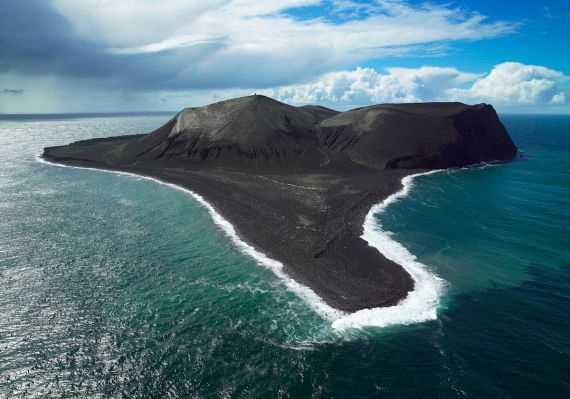 Surtsey is a volcanic island and part of the Vestmannaeyjar submarine volcanic system in Iceland. Vestmannaeyjar also produced the famous eruption of Heimaey (Eldfell). Surtsey is about 1.5 km in diameter and has an area of 2.8 square km. Surtsey is 33 km south of the main island of Iceland and 20 km southwest of Heimaey. The island is named for Surtur, a giant of fire in Icelandic mythology.

It is all the more outstanding for having been protected since its birth, providing the world with a pristine natural laboratory. Free from human interference, Surtsey has been producing unique long-term information on the colonisation process of new land by plant and animal life. Since they began studying the island in 1964, scientists have observed the arrival of seeds carried by ocean currents, the appearance of moulds, bacteria and fungi, followed in 1965 by the first vascular plant, of which there were 10 species by the end of the first decade. This island is unlikely to disappear entirely in the near future. The eroded area consisted mostly of loose tephra, easily washed away by wind and waves. Most of the remaining area is capped by hard lava flows, which are much more resistant to erosion. In addition, complex chemical reactions within the loose tephra within the island have gradually formed highly erosion resistant tuff material, in a process known as palagonitization. On Surtsey this process has happened quite rapidly, due to high temperatures not far below the surface.
Posted by Anonymous at 1:30 AM