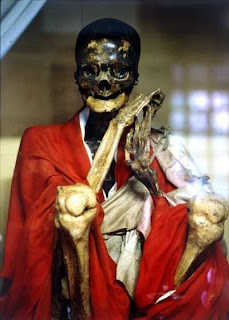 Sokushinbutsu were Buddhist monks or priests who caused their own deaths in a way that resulted in their mummification. This practice reportedly took place almost exclusively in northern Japan around the Yamagata Prefecture. It is believed that many hundreds of monks tried, but only between 16 and 24 such mummifications have been discovered to date. The practice is not advocated or practised today by any Buddhist sect.For 1,000 days (a little less than three years) the priests would eat a special diet consisting only of nuts and seeds, while taking part in a regimen of rigorous physical activity that stripped them of their body fat. They then ate only bark and roots for another thousand days and began drinking a poisonous tea made from the sap of the Urushi tree, normally used to lacquer bowls. This caused vomiting and a rapid loss of bodily fluids, and most importantly, it made the body too poisonous to be eaten by maggots. Finally, a self-mummifying monk would lock himself in a stone tomb barely larger than his body, where he would not move from the lotus position. His only connection to the outside world was an air tube and a bell. Each day he rang a bell to let those outside know that he was still alive. When the bell stopped ringing, the tube was removed and the tomb sealed. After the tomb was sealed, the other monks in the temple would wait another 1,000 days, and open the tomb to see if the mummification was successful. If the monk had been successfully mummified, they were immediately seen as a Buddha and put in the temple for viewing.
Posted by Anonymous at 1:30 AM