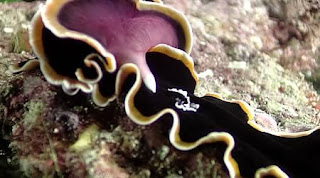 Penis fencing is a mating behavior engaged in by certain species of flatworm, such as Pseudobiceros hancockanus. Species which engage in the practice are hermaphroditic; each individual has both egg-producing ovaries and sperm-producing testes.The flatworms “fence” using two-headed dagger-like penises which are pointed, and white in color. The mating ritual involves a violent battle during which two hermaphroditic flatworms attempt to pierce the skin of one another with one of their penises. The “winner” is the organism that inseminates the other; the winner becomes the father. The sperm is absorbed through pores in the skin, causing fertilization in the “loser,” who becomes the mother.Child-bearing, while necessary for the continuation of a species, requires a considerable investment of time and energy from one or both parents, and according to Bateman’s principle, almost always more from the mother. Thus, from a biological point of view, it is preferable to be the father rather than the mother. However, there are other hermaphroditic species where both partners try to be inseminated rather than to inseminate.
Posted by Anonymous at 1:30 AM