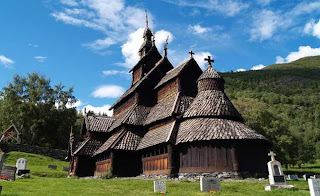 The Borgund in Norway is a wonderful example of stave architecture, with four carved dragonheads sprouting from its rooftop gables — like something you’d see in the Far East — and steeply pitched rooftops that mirror the dramatic plunges of the surrounding mountains. Apart from a row of benches, a simple altar, and a cupboard for storing religious vessels, there’s not much to see inside the church, but the fantastical exterior is well worth a look.

Borgund was built sometime between AD 1180 and 1250 with later additions and restorations. Its walls are formed by vertical wooden boards, or staves, hence the name stave church. The 4 corner posts were connected to one another by ground sills, resting atop a stone foundation.The rest of the staves then rise from the ground sills, each stave notched and grooved along the sides so that they lock into one another, forming a sturdy wall.

Borgund is built on a basilica plan, with reduced side aisles, with an added chancel and apse.It has a raised central nave demarcated on four sides by an arcade. An ambulatory runs around this platform and into the chancel and apse, both added in the 14th century. An additional ambulatory, in the form of a porch, runs around the exterior of the building, sheltered under the overhanging shingled roof. The floor plan of this church resembles that of a central plan, double-shelled Greek cross with an apse attached to one end in place of the fourth arm. The entries to the church are in the three arms of the almost-cross.
Posted by Anonymous at 1:30 AM