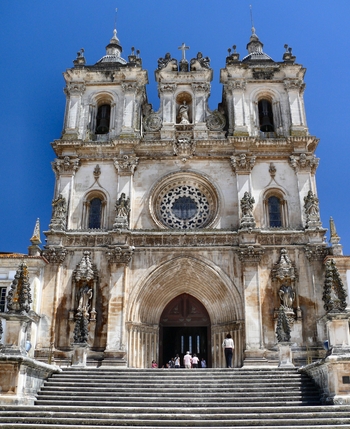 The Alcobaça Monastery in central Portugal was founded by king Afonso Henriques in 1153, and took 99 years to complete. This was the first building of the gothic style in Portugal, and is still the largest church in the country, it is of no surprise it went on to become one of the most important medieval monasteries in Europe. The monks of the monastery spent their lives meditating on religion and producing manuscripts, until it was pillaged by the French in 1810, it had one of the largest medieval libraries recorded. This monastery was the chosen burial place for many royals during the 13th and 14th centuries, their elaborate tombs are some of the best surviving examples of medieval engraving and sculptures in Europe. The tombs of Pedro I and his mistress, Ines de Castro, are particularly intricate, both feature relief of the occupant on the lid of the tomb, the kings tomb rests on carved lions while Ines is supported by carvings of creatures which are half man – half animal, and are covered in engravings showing angels and biblical scenes. The best known tomb is Queen Urraca’s, a Romanesque tomb engraved with an image of the Queen on the top, while around the body of the tomb are reliefs of the Apostles, the King and their children. This building is truly a showcase for the skills and dedication of the medieval craftsmen of Europe.
Posted by Anonymous at 1:30 AM