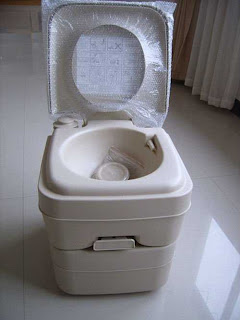 Need a toilet urgently? Unfold one in a minute. Frenchman Laurent Helewa designed the lightweight, easy to construct and carry toilet after Hurricane Katrina, when thousands of displaced people were crammed into a stadium for a week, with hardly any access to facilities.

"It's a taboo subject, but necessary in case of natural disasters,".

"The first problem is to have access to a toilet. Because if not, people will do their business wherever, and you end up with epidemics such as cholera," said Helewa, who is a doctor.

Weighing about two kilogrammes (4.4 pounds), his invention is essentially a piece of cardboard that folds into a boxed seat in a minute, and comes with plastic bags that each contain an absorbent pad to soak up liquids.

Helewa, who gamely climbed atop a sample, claimed that the heavy-duty version is able to withstand a weight of 200 kg and usage of 20 hours a day, after it was tested by four armies.
Posted by Anonymous at 1:30 AM