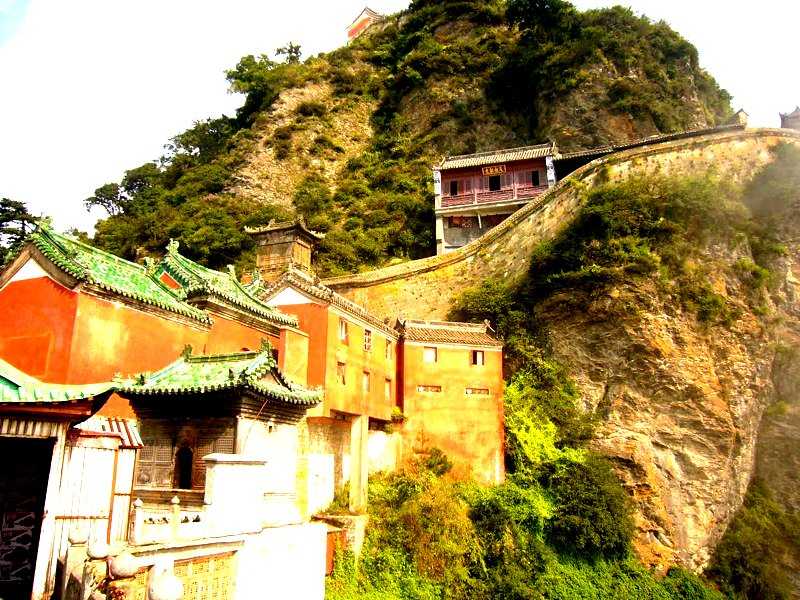 The Wudang Mountains are a small mountain range found in eastern China, which have been inhabited since at least 250 AD. The area is known for its Taoist monasteries, which were renowned as centers for meditation, martial arts, agriculture and medicines. People traveled to this area to research, learn and practice these skills. The palace and temple complex was constructed in the Ming Dynasty and within it are buildings dating from the 7th century. One of the more famous temples is the Golden Hall; built in 1416, the hall is constructed from gilded copper. It consists of 20 tons of copper and over 300kgs of gold, and was supposedly forged in Bejing, then moved to Wudang. The Nanyan Temple perches precariously on top of a cliff, in legend it is known as the place from which Emperor Zen Whu flew to heaven. The entire temple, including beams, gates and windows, is carved from rock and within the temple are gilded bronze statues of dozens of Taoist deities. Scattered across the cliffs are 500 gilded iron statues of heavenly officials. Another notable building, the Purple Cloud Temple is made up of several halls, the Dragon and Tiger Hall, the Purple Sky Hall, the East Hall, the West Hall and the Parent Hall. This temple contains shrines to Zhen Wu throughout his life. It also houses relics including the Green Dragon Crescent Blade which dates back to the 7th century.
Posted by Anonymous at 1:30 AM