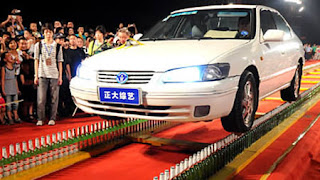 A Chinese man made a stunning Guinness world record of driving across two rows of bottled beers for over 60 metres in Wenzhou. Li Guiwen, an army driver from Beijing, steered along 1,798 bottles for 60.19 metres in a time of eight minutes and 28 seconds in eastern China's Zhejiang province. He had previously attempted the same record in 2009, but due to rain, the right tyre of his vehicle slipped off the bottle track. Li, who thought of creating this record after a drinking bet with friends, added, "Since the failure last year, I have been training constantly."
Posted by Anonymous at 1:30 AM