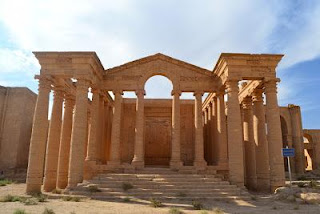 Hatra is located to the northwest of Baghdad in Iraq, you may recognize it from the opening scenes in the film, The Exorcist. It was constructed during the 3rd century BC, by Arabs under the Iranian Parthian Empire. The city became the capital of the first Arab kingdom and became an important border fort against roman invasion. The city was ruled by Arabian princes who would have paid a yearly tribute to the rulers of the Iranian empire, until the Iranians took the city by force in 241. Hatra is recognized as one of the best preserved Parthian cities, with many of its structures still standing, including the inner and outer defensive walls and towers, and a range of temples dedicated to a different Gods from many different cultures. Some of the temples found have been dedicated to the Babylonian and Akkadian God Nergal, the Greek God Hermes, the Aramaean Gods Atargatis and Ba’al Shamayn, the Arabian Gods Allat and Shamiyyah and the Mesopotamian God Shamash, showing the cultural differences and tolerance that was once prevalent in this area.
Posted by Anonymous at 1:30 AM