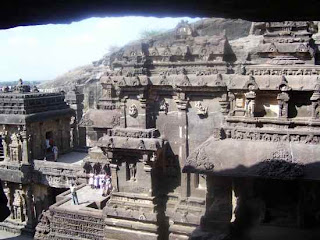 Ellora is the site of monumental, rock cut, cave temples representing Buddhist, Hindu and Jain religions, built from 400AD in close proximity to each other to show the religious harmony in the area. The structures are multi level buildings, carved directly from caves within the mountain face, and include monasteries, shrines and places of worship. Many of the buildings have vaulted ceilings and are all intricately carved, with most of the shrines containing large carved deities. During construction, 200,000 tonnes of rock had to be removed from the site by generations of workers. Some notable caves are: the Buddhist shrine Vishvakarma, which features a multi-storied entrance, a large hall with vaulted ceilings and a 15ft carving of Buddha in a preaching pose; The Indra Sabha is a two level Jain cave with a monolithic shrine, like all of the Jain caves it once had richly painted ceilings, part of which are still visible today. It also has fine carvings of lotus flowers, Yaksha Matanga on an elephant and Ambika sitting on a lion under a mango tree. Kailasanatha is the centerpiece of Ellora, made to resemble mount Kailash, the home of lord Shiva, this Hindu shrine was built by Krishna I in around 760AD. The structure is covered in detailed and intricate carvings, including sacred bulls and life-sized elephants supporting the shrines.
Posted by Anonymous at 1:30 AM