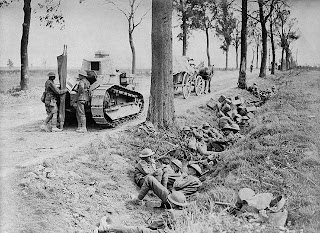 By 1917, the Western Front had been at a stalemate for two years. Many bloody battles, including the slaughterhouses at Verdun and the Somme, had resulted on millions of casualties on both sides, and Europe was growing weary of the war. The Allied high command needed to break the German lines and advance. The German army was by now numerically inferior, and a solid victory breaking the German lines could easily end the war. As a result, a plan was formed to assault the German trenches at the town of Arras, which, combined with a French assault to the South, was hoped would finally break the deadlock on the Western Front and bring about an Allied victory. The Battle of Arras opened on 9 April, 1917, and initial efforts led to the capture of the strategically important Vimy Ridge by Canadian forces and to major gains by British forces in the center. However, when the battle closed on 16 May, 1917, the British advance had been halted. Although tactically a British victory, the battle did not result in the hoped for breakthrough, and was ultimately indecisive. The British lost 158,000 casualties in the assault, to a German loss of 120,000.
Posted by Anonymous at 1:30 AM