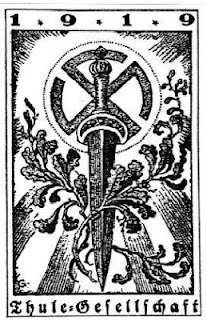 Lots of secret organizations are suspected of having malevolent ulterior motives, but the Thule Society is one of the few where such suspicions have been proven. The group was unofficially started in Germany just after the end of WWI. It began as a kind of German heritage group that dabbled in the occult, but it quickly transformed into an organization that sought to forward the ideology of the Aryan race, and it took an outwardly racist approach toward Jews and other minorities. The group soon boasted over a thousand members, and even had its own propaganda newspaper. In 1919, members of the Thule Society formed a political organization called the German Workers’ Party. A young Adolf Hitler became a member, and eventually took over the party, which would later become known as the National Socialist German Workers’, or Nazi, party.

Secret Practices
Even before the Thule Society became a vehicle for Nazism, the members were involved in some pretty bizarre activities. The strangest was the group’s fascination with the Aryan race, whose origins they tried to trace back to the mythical land of Thule, which the Greeks had claimed was found north of Europe near Iceland and Greenland.