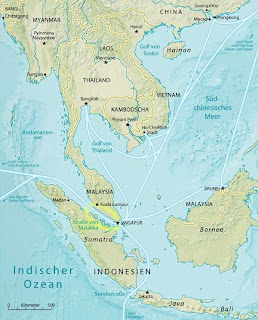 In June 1947, a chilling SOS message was picked up: “All officers including captain are dead lying in chartroom and bridge. Possibly whole crew dead.” This was followed by some indecipherable Morse code, and one final grisly message… “I die.” Then, silence.

It was picked up by nearby ships and listening posts, who identified the vessel as the Dutch freighter SS Ourang Medan and located it within the Strait of Malacca that separates Indonesia from Malaysia. The nearest merchant ship, The Silver Star, raced to her aid. The Silver Star was soon alongside the Dutch ship and their boarding party found a macabre sight: every member of the crew lay dead, their corpses scattered on the decks. More than this, their eyes were still open and expressions of sheer terror were etched on their features. The Silver Star’s party found the radio operator dead too, his hand still on the Morse sending key, eyes wide open and teeth bared. There were no sign of wounds or injuries on any of the bodies.

The decision was made to tow the mysterious ship back to port, but before they could get underway, smoke began emanating from the decks below. The boarding party hurriedly returned to their ship and barely had time to cut the tow lines before the SS Ourang Medan exploded and swiftly sank.

It has been claimed that clouds of noxious natural gases could have bubbled up from fissures in the seabed and engulfed the ship; even aliens and ghosts have been cited as possible explanations for the Ourang Medan’s macabre and mysterious demise. To this day, the exact fate of her crew remains an impenetrable mystery.
Posted by Anonymous at 1:30 AM