The Aluminum Wedge of Aiud 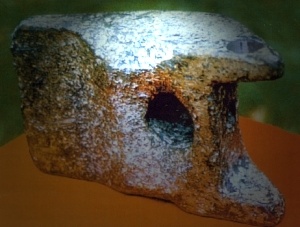 In 1974 (or 1973 depending upon which source you believe) a curious aluminum wedge was discovered on the banks of the Mures River in Transylvania, near the city of Aiud. It was found buried deep beneath the sand alongside two mastodon bones.

Upon examination, the object – which resembled a hammer head – was found to be encased in a one millimeter thick layer of oxide which suggests that it is some 300-400 years old. A second, Swiss investigation confirmed the results of the first examination. Furthermore, as it was found with mastodon remains it could even be as much as 20,000 years old.

Aluminum is abundant in the earth’s crust but it is always combined with other minerals and the wedge predates the technology used to extract it. An aeronautical engineer suggested that the wedge is similar to the foot of landing gear used on spacecraft. The scientific community believes ‘the wedge was made on earth and its purpose is not yet identified’. Unfortunately, the Aluminum Wedge of Aiud is currently locked away in a secret location; however, some photographs of the curious, unexplained object do exist online.
Posted by Anonymous at 1:30 AM