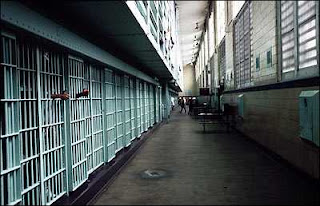 Rikers Island, New York – Stabbings, beatings and brutal treatment from prison guards characterize this American prison. Filled primarily with offenders who are visible minorities, jailed on drug offenses, the prison is a hotbed of violence and aggression. In 2007, prisoner Charles Afflic was beaten senseless with a billy club by a prison official, who hit him repeatedly from behind: his injuries were so severe they necessitated brain surgery. 6 inmates committed suicide, hanging themselves with bedsheets in their cells, during the first six months of 2003 alone. Rikers has a reputation for its cruel treatment of mentally ill prisoners, who often turn to suicide in lieu of treatment and understanding.
Posted by Anonymous at 1:30 AM