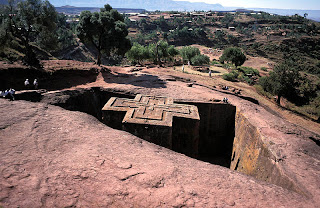 Lalibela is a rural town in the north of Ethiopia. It is also one of the countries holiest cities and a centre for pilgrimage. The 13 churches in the town have been carved completely from rock directly into the ground. It was under the instruction of Saint Gebre Mesqel Lalibela during his reign as Emperor of Ethiopia, that these churches were constructed, the layout and names of the buildings in Lalibela are a representation of Jerusalem. This has helped to date the churches to around the 1200s, after the 1187 capture of Jerusalem by Saladin. The largest monolithic church in the world, Bet Madhane Alem, is also home to the Lalibela Cross: a 12th century processional cross. Bete Maryam is thought to be the oldest of the churches, and Bete Golgotha is where it is believed King Lalibela is entombed. These churches are very unusual in that they are carved into the ground instead of into a cave or a cliff face, as most other rock carved buildings are. This process must have been very slow work and each church is carved with painstaking detail and stands as testament of the dedication of these people to their religion
Posted by Anonymous at 1:30 AM