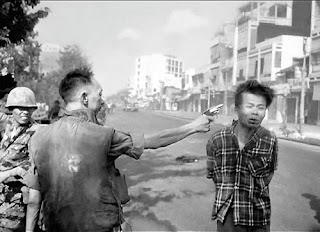 The photo above was taken in 1968 and is one of the most famous images of the 20th century. The picture was taken by photographer Eddie Adams and won the Pulitzer Prize. It is also included in the 15 Incredible Historical Photographs list. Many have seen this photograph but most are not aware of the full story behind it. The man on the left shown executing a prisoner is South Vietnamese national police commander, General Lone. Before the execution it was reported that the prisoner had been the captain of a terrorist squad that killed the family of one of his deputy commanders. After shooting the prisoner, the general walked over to a reporter and said, “These guys kill a lot of our people, and I think Buddha will forgive me.” When the photo was shown on television and appeared on the front pages of newspapers around the world, it was seen as an act of savagery and symbolized an unjustified war. Three months after the photo was taken, General Loan was severely wounded and taken to Australia for treatment. There was such an outcry against him that he was moved to Walter Reed Army Medical Center in Washington DC. During the fall of Saigon in 1975 he asked for American help in fleeing with his family but was ignored and had to escape with his family in a South Vietnamese plane. Gen. Loan, whose right leg had been amputated, settled in northern Virginia, where he eventually opened a pizzeria restaurant. Loan was then forced into retirement when his identity was publicly disclosed. Eddie Adams (the photographer) stayed in touch and recalled that on his last visit to the pizza shop, he had seen written on a restroom wall “We know who you are, fucker.”

Interesting Fact: Eddie Adams said this in a Time magazine interview: “The general killed the Viet Cong; I killed the general with my camera. Still photographs are the most powerful weapon in the world. People believe them, but photographs do lie, even without manipulation. They are only half-truths. What the photograph didn’t say was, ‘What would you do if you were the general at that time and place on that hot day, and you caught the so-called bad guy after he blew away one, two or three American soldiers?’” When General Loan died of cancer in 1998, Adams praised him and sent flowers with a card that read, “I’m sorry. There are tears in my eyes.”
Posted by Anonymous at 1:30 AM