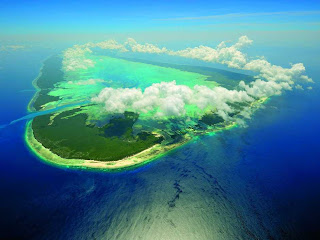 Aldabra is the world’s second biggest coral atoll, it is uninhabited, isolated and virtually untouched by humans. The atoll is the home to the world’s largest population of giant tortoises, which makes it an extremely valuable conservation site. During the 1700s, the islands were used by the French to hunt giant tortoises, as they were considered a delicacy at the time, but by the 1900s they had been hunted to the brink of extinction. The tortoises also share this atoll with the Aldabra Rail, the endangered Malagasy Sacred Ibis, Green and Hawksbill turtles and two species of bats found only on Aldabra. The atoll was declared a world heritage site in 1982, as it is home to so many rare and unusual creatures.
Posted by Anonymous at 1:30 AM