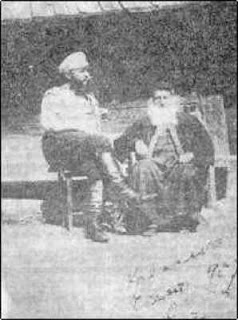 Mitar Tarabich is a little known prophet from Serbia. He lived from 1829 – 1899, and is believed to have predicted many events relating to Serbia in the 1930s, 1940s and World War II:

“After [Tito] our land will be governed by some kind of commission, but it will never be as it was. Even though the people in our kingdom will forget about misery and hunger and will live in great wealth, brother will start to hate and think evil of brother…. The Serbs will separate from each other, and they will say: “I am not a Serb, I am not a Serb.” The unholy one will infiltrate this nation and bed with Serbian sisters, mothers and wives. He will sire such children that among the Serbs, since the beginning of the world, these will be the worst of offspring. Only weaklings will be born, and nobody will be strong enough to give a birth to a real hero.”

He also made other predictions about the future, relating mostly to technology: “Men will build a box and within will be some kind of gadget with images… “, “Man will travel to other worlds to find lifeless deserts there…”, “Those who will read and write different books with numbers will think that they know the most…”.
Posted by Anonymous at 1:30 AM