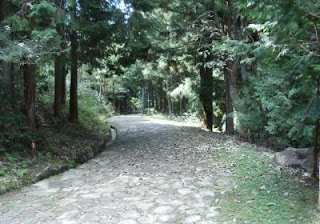 The Nakasendo Road runs through the very centre of Japan, brushing the shoulders of the Japan Alps and winding along river valleys and over forested passes. The best preserved of the five Edo Period highways, the Nakasendo Road connected Kyoto and Tokyo. Long stretches, particularly in the more mountainous regions, remain very much as they did in the 17th century, and it is still possible to walk the route of the highway between the old and new capitals.In Japan’s early Edo period five highways were rejuvenated and formally nominated as official routes for the use of the shogun and his feudal lords (daimyo). They provided the communications network that the shogunate needed to stabilize and rule the country. One of these highways was the Nakasendo (Middle Mountain Way) stretching from Kyoto, where the emperor exercised nominal authority, through the central mountain ranges of Honshu Island and on to Edo (Tokyo), from where the shogun wielded the real power. Some of the remaining and best-preserved sections of the Nakasendo still offer a delightful walk through rural Honshu.
Posted by Anonymous at 1:30 AM