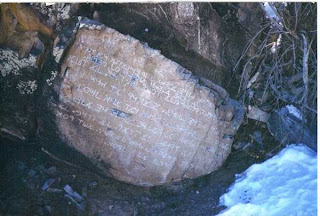 An 80 ton boulder on the side of Hidden Mountain in New Mexico bears a puzzling inscription. Carved into the stone’s flat side is what has been interpreted by some to be a version of the Ten Commandments in a form of ‘Paleo-Hebrew’.

Discovered by academia in 1933 by archaeology Professor Frank Hibben, it had been known to locals for decades, and the guide who led Hibben to it said he had known of it since the 1880s – a date which, if genuine, means the rock’s authenticity is likely, as the Paleo-Hebrew script was then unknown. This means it outdates Columbus’s discovery of America and suggests that people from Israel or Phoenicia (who used a similar language) discovered the continent centuries before it was thought possible. Skeptics draw upon punctuation and grammatical ‘errors’ as evidence of it being a fake, while others still doubt this debunking.
Posted by Anonymous at 1:30 AM