The downtown core of big cities across the world, are the cultural pulse and economic engines of urban regions where millions of people live. The skyline is the fingerprint of that city. All urban life begins each day and ends each night under the watch of the city’s tallest skyscrapers and most grand architectural structures. So kick back and appreciate the view that they have to offer…

Seattle is the commercial, cultural and advanced technology hub of the Northwest USA and a major port city for Pacific and European trade. Home 4 buildings over 200m and the famous 184m Space Needle observation tower, Seattle is surrounded by mountains and water and offers some picture-perfect views. Seattle is commonly referred to as the Emerald City and renowned as a great social and corporate city with infrastructure. The planning is spectacular, as it helped create the hill-like effect on the skyline’s silhouette, add the mountain backdrop and this city is almost a picture perfect. Best View(s): Kerry Park (Franklin Place.

What was a tiny fishing village on the border of Hong Kong in 1970 is now a buzzing metropolis of over six million people! Already containing 20 buildings at over 200 meters tall, including the Shun Hing Square (the 8th tallest building in the world), the development is not stopping. There are photos of Shenzhen floating around the Web that appear so surreal, experts and enthusiast argue whether or not they doctored or real. Shenzhen is a spectacle of lights and neon signs after sunset, you can’t help but ask yourself… if you are in a video game or in a real city. The only downfall of the Shenzhen skyline is it is often criticized for its high levels of smog.

This is probably the most impressive city worldwide that has less than 2 million residents. Marvelous modern buildings reach the sky here, and while the skyline is not exactly the densest, it does allow buildings to soar and stand out. Kuala Lumpur has 10 structures standing over 200 meters tall with three of them being in the 25 tallest buildings worldwide. Kuala Lumpur is also home to the tallest twin buildings, the Petronas Towers as well as the peaking, 420 meter Menara Kuala Lumpur Tower. Along with Singapore are said to be the frontier cities to boom from the Southeast Asian economic revolution.

Toronto is a meeting place, a crossroads of many cultures and ethnicities. . Toronto has 7 structures in its skyline that stand at over 200 metres, including the astonishingly tall 553 metre, CN Tower, which is often referred to as the tallest free-standing structure in North America. Currently, the CN Tower possess the world’s highest observation deck, making this city’s skyline one of the most immediately identifiable. Toronto, also contains a diverse collection of renowned architecture, including it’s city hall. Toronto also has one of the densest financial districts in North America only beaten by New York and Chicago. Toronto is still experience a condo boom where 30 story condos have been springing up along the lakeshore and in the suburbs. Best View(s): Centre Island or Leslie Split

Tokyo is the world’s most populated city and considered by many to be the capital of the Eastern world. Its skyline has a number of unique characteristics that set it apart from other big city skylines, among them 18 structures at over 200 metres tall (including the Tokyo Tower which changes colors every night). But because of the density and vast size of the city, every corner appears to have its own skyline. With the height restrictions and the required red lights that flash atop all mid to tall-sized buildings make the city look spectacular at night. Tokyo is filled with neon lighting and unique, contemporary architecture, and like New York City is also often portrayed in movies for its aesthetic and eye-catching cityscapes. The Mt. Fuji range in the distant view, adds that technology meets nature contrast. Interesting fact: Tokyo houses the world’s largest fleet of helicopters to get around town if traffic gets too crazy.

One of the best (urban) planned and cleanliest metropolitan cities in the world, Singapore looks like an architectural city model come to life. The buildings cannot be higher than 280 metres due to air traffic control restrictions, but that has added a tall (but not too tall) and consistent building height and space pattern that makes this skyline unique: Three buildings are exactly 280 metres tall and 6 others (11 total) stand at just over 200 metres. The buildings are mostly light-coloured and there is a large expanse of greenery dotted around the city core. This South-Eastern city is definitely in a league of its own.

Not to be mistaken for a space station, Shanghai is a real city! China’s biggest and most advanced city, Shanghai was said to be one of the most modern cities at the turn of the 20th century, but lost its glory, due to a long standing repressive rule. It is now quickly regaining its position as one of the biggest economic powerhouses in the world. Shanghai is becoming a showcase of modern architecture and is quickly amassing a collection of sky reaching buildings decked along the edges of the semi-circular shoreline in Pudong district. In Shanghai you’ll find 28 structures that are over 200 metres tall and two over 400 metres including one that is insanely tall (468m), the Oriental Pearl TV Tower.

New York City has one of the densest and most diverse skylines, with a huge collection of buildings and building styles. Thanks to artist’s and Hollywood’s obsession with the city, it is also the most easily recognizable skyline in the world. New York City has an amazing collection of 48 buildings that stand over 200 metres – the most in the world! New York city probably has the greatest heritage in terms of skyscrapers, building the world’s first commercial super-tall. The four tallest buildings in NYC were all built in the early 1930s! Home of the famous, now destroyed World Trade Center Towers, the Empire State building, the Statue of Liberty and the United Nations, New York City is the financial capital of the western world. New York’s skyline probably has the most compact and overwhelming collection of architecture from almost any point in the city. New York skyscrapers pattern do create a skyline effect against a horizon, but it is probably a better view from the inside looking out and about rather than looking at it from afar. Best View(s): NJ’s Liberty State Park, Fulton Street Pier Under Brooklyn Bridge, Staten Island Ferry 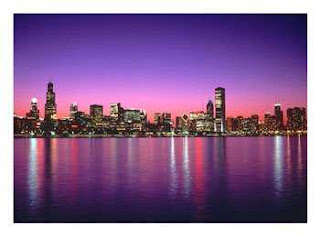 Chicago is the birthplace of the modern skyscraper. When Chicago built its first steel high-rise in 1885, it was not the tallest structure in the world but the first example of a new form of engineering that would change nearly every city on earth. Chicago has 20 buildings over 200 metres tall (three of which are among the top 20 tallest buildings in the world, including the tallest in North America). Chicago has some of the finest mid-century architecture and examples of modern skyscrapers. This skyline has many distinctive views, changing it’s pattern ever so subtly at each angle you choose to look at it from. Like Hong Kong and New York, Chicago’s skyscraper’s really do create a line, stacked up along the shoreline, creating a true, skyline effect. Best View(s): Adler Planetarium or Montrose Point or US Cellular Field

The city of Hong Kong has the greatest skyline in the world! Hong Kong has a whopping 43 buildings over 200 metres tall, 30 of which were built in the year 2000 or later!!! There are also an number of residential condominiums with 60 stories. It also boasts four of the 17 tallest buildings in the world… That’s 20% of the top 20, all in one city! Egbert Gramsbergen and Paul Kazmierczak have dubbed Hong Kong “The tallest city in the world” in their online Skyscraper Cities Ranking List which is referenced in the Almanac of Architecture in 2006. Contrary to common belief, Hong Kong’s skyline shows a large selection of distinct sky-reaching towers, rather than block-style apartments. At night, the skyline is glimmers with lighting and reflections. This city exemplifies the post-modern skyscraper and skyline. Finally, the mountainous backdrop makes this skyline the greatest on the planet
Posted by Anonymous at 1:30 AM