Valley of the Moon 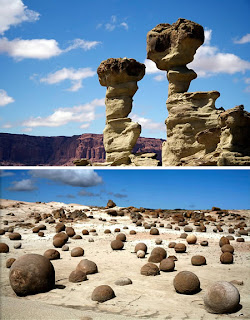 Ischigualasto, meaning “the place where you put the moon” is a remote valley in Argentina. It is studded with geological formations left by wind erosion, amazing standing stones and boulders that are so rounded they look like enormous marbles. The valley's once-fertile ground is now arid and contains so many plant and animal fossils that paleontologists come from all over the world to study them. Erosion over the millennia unearths the fossils as well as other geological formations such as a host of almost spherical concretions. The wind, inexorable and patient, has pounded the local bedrock for an age. Revealed, the boulders that mudstone – in its original wet form, helped to form look as if giants have been playing marbles.
Posted by Anonymous at 1:30 AM