The Girl who Cries Blood 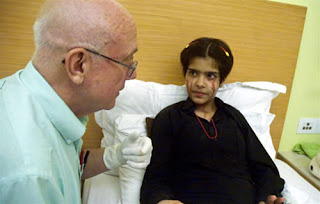 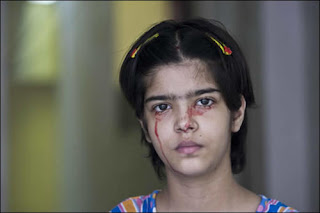 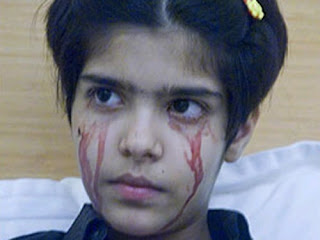 This is the girl who has baffled top doctors because she spontaneously bleeds from her pores up to 50 times a day.Twinkle Dwivedi, 14, has strange disorder which means she loses blood through her skin without being cut or scratched. Terrified Twinkle has even undergone transfusions after pints of it seeped through her eyes, nose, hairline, neck and soles of her feet.
Dr George Buchanan, a leading haematologist who has worked in Britain, travelled to India to look into the startling case. The teenager from Lucknar, Uttar Pradesh, has been suffering the frightening episodes up to 50 times a day for the last three years. She said: "I bleed from my eyes, my hands, my head, from everywhere. From my ears, nose and eyes as well. "It doesn't hurt when the bleeding starts. But it makes me tired and sometimes I have headaches." Dr Buchanan, an American paediatric blood specialist, visited Twinkle's family at the Jaslok Hospital in Mumbai where he observed her bleeding.
He said: "I've never seen a case of someone who bleeds spontaneously from their scalp or their palms, or read about it in medical history.
"I was interested to see if I could help Twinkle."
The doctor was called to the family's hotel room to witness bleeding which began from her hair parting.
He was shocked to find no signs of cuts, bruising or redness.
Dr Buchanan said: "It doesn't seem physically possible for blood to seep through intact skin.
"But I saw no signs of cuts or bruising anywhere on her body."
Dr Buchanan and his team carried out a series of tests including cutting Twinkle's skin to time how quickly the bleeding stops.
Tests show she may have a mild form of a clotting disorder, which means her platelets do not stick together properly. But this is not enough to explain the spontaneous bleeding.
Dr Buchanan is also investigating whether Twinkle or her mum cause the bleeding themselves.
Twinkle, a Hindu, said: "I am not causing this. Why would I want to make myself bleed?
Posted by Anonymous at 1:30 AM