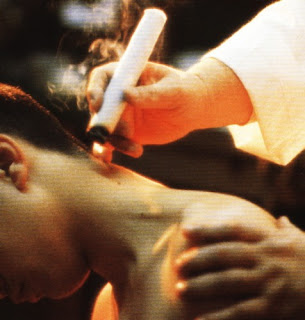 Moxibustion, often used in Asian locations including Vietnam, Korea, Japan, China, Mongolia, and Tibet, requires the use of mugwort herb, often called moxa. It is one of the most widely used types of traditional techniques. The moxa can be used indirectly or directly. Indirect moxibustion involves grinding the herb into fluff and then using it while using acupuncture needles. Other times, in direct moxibustion treatment, the herb is put into a cigar-like stick and is burned directly on the patient’s skin. This treatment is often used to fight against dampness and colds within the body, treating feverish diseases, as well as weakness and even to relieve side effects brought by epilepsy. It’s said that the technique is able to turn a breech baby into a normal position due to the fact that mugwort acts as an ammenagogue, which stimulates blood-flow in the uterus and pelvis.
Posted by Anonymous at 1:30 AM