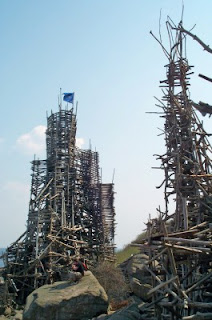 In 1980, Swedish artist Lars Vilks built a series of wood and stone sculptures on the beach of the Kullaberg nature preserve in Skane, Sweden. The artworks, which look like strange whimsical castles, eventually became a popular tourist attraction. They also drew the ire of the local city council, which decreed that Vilks had illegally built a “house” in a nature preserve and demanded the pieces be removed. Not willing to see his art destroyed, Vilks did what any reasonable person would do: he declared the stretch of beach to be an independent, sovereign nation free from the laws and rules of the Swedish government. Vilks named his new country the Kingdom of Ladonia, and quickly came up with a flag and a manifesto that said that his nation’s only tax policy was that citizens should “give away their creativity.”

By the 2000s, Vicks’s country had built up an unofficial population of 14,000—unofficial because none of them actually lived there—made up mostly of fellow artists and other supporters of his cause. It also claimed to have a currency (called the Ortug) and a national language (phrased Latin), and there was even a set series of social classes. Still, even today the fledgling country has yet to impress Sweden, which has never recognized it as a legitimate nation.
Posted by Anonymous at 1:30 AM