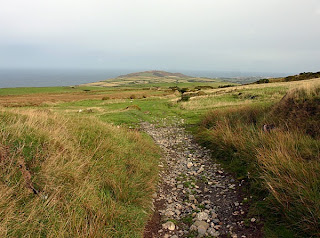 Also referred to as the Dalby Spook, Gef was said to be a creature resembling a mongoose. It was reported to live with the Irving family in their farmhouse near the hamlet of Dalby on the Isle of Man. Gef’s true identification remains shrouded in mystery. It has been interpreted as (among other things) a poltergeist, a cryptid and of course, a hoax.

In September 1931, the Irvings started hearing strange scratching noises coming from their farmhouse’s attic. Soon the scratching became more like a baby ‘gurgling’. The gurgling then evolved to ‘resemble a baby learning to talk and shortly after to mimic certain words that the ‘animal’ seemingly picked up from the Irving family’. If that wasn’t weird enough it described itself as a “an extra, extra clever mongoose,” an “earthbound spirit” and “a ghost in the form of a weasel.” It could even sing.

The case was investigated by Harry Price, but aside from a few grainy photographs of a strange animal roaming the fields outside the house, nothing substantial was ever recorded.
Posted by Anonymous at 1:30 AM