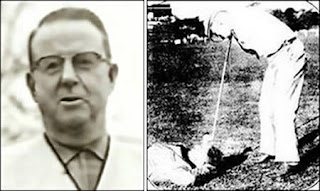 Tommy McAuliffe was the 'World Champion Armless Golfer'. Tommy was born in 1893 in Buffalo, New York, the oldest of five children. His arms were amputated after being run over by a train in 1902. He was left with no arms, not even stumps. He learned to write by holding a pencil in his mouth. He was the president of his senior class, attended three years of college, married in 1919, father of four children and grandfather of 16. He became a caddy at a nearby golf course. Using an old discarded club, he learned to play by holding the club between his neck and shoulder. He became so good he won the caddies tournament. After finishing college, Tommy was encouraged by his brother Walter, a professional golfer, to start his own Vaudeville Act in New York City. His "Trick Shot' act became so popular he traveled to all 48 states, all over Canada and Australia with his show. He did golf exhibitions at major golf courses in the U.S. He knew and played golf with Bobby Jones, Gene Sarazen, Walter Hagan, Chick Evans, Tommy Armour, Jim Barnes, Geo Van Elm and Sports Writer O.B. Keller. His low score for 18 holes was 85. His average was 92. Tommy became the "World Champion Armless Golfer."
Posted by Anonymous at 1:30 AM

Email ThisBlogThis!Share to TwitterShare to FacebookShare to Pinterest
Labels: sports