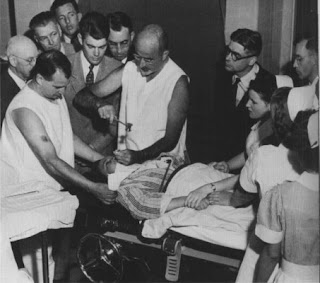 Lobotomies make the top of the list for being one of the most barbaric and mistaken healing technique ever used in medicine. A lobotomy was used in order to treat many different mental illnesses, including clinical depression, anxiety, schizophrenia, and those who were considered “nuisances” by often portraying youthful defiance or mood swings. The height of lobotomy use came during the 1930s-1950s, one of the most notable users being psychiatrist Walter Freeman. A lobotomy was preformed by severing the connections to and from the prefrontal cortex. At one point, the use of lobotomies became out of hand. Doctors were performing 50 a day, and notable Dr. Freeman began to do them on live television. He even utilized a standard ice pick to complete the surgery. Though many claimed that these surgeries worked, many people died from them, and often times the outcome resulted in loss of memory and patients who were “cured,” but only by the standards that their symptoms were gone. In the end, most patients became idle and extremely dependent on their families.
Posted by Anonymous at 1:30 AM