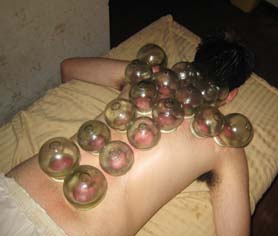 Fire cupping doesn’t take much explanation as it is exactly what you would think it to be from the name. This technique has been around for a long time, as archaeologists have found evidence of its use dating back to 1,000 B.C. This healing technique involves using a vacuum that is created by heated air that is warmed with fire that is then put into a glass cup and held against the patient’s skin. The cups are generally bell shaped and up to 12 can be used at a time. They are generally left on the skin for about 20 minutes. Fire cupping is generally only used in Chinese medicinal cultures and is often used to treat pain, arthritis, and congestion. It can also be used to reduce swelling and musculoskeletal discomfort and ease depression. There is no evidence that supports the healing power of this technique, but many believe it does bring about a sense of relaxation.
Posted by Anonymous at 1:30 AM