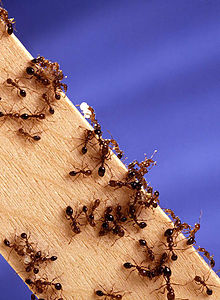 While having a picnic with ants doesn’t sound so bad, as most ants are harmless and miniscule compared to the human body, having a picnic with fire ants definitely isn’t the wisest idea. There are over 280 different species of ants that sting and one of the most widely known is the fire ant. Other ants kill by stinging their prey and then spraying the wound with acid, but the fire ant is particularly ruthless. They kill by stinging their prey and then injecting venom known as solenopsin. And because of this, when a human is stung by the ant, it can be compared to the sensation felt when being burned; however, the sting is usually minor and something that the body can fight on its own.

As you’d imagine, a little ant can’t do much damage to a human. All we’d have to do is make a little use of our left shoe. However, ants live in colonies and sometimes, with enough stings and enough bodily sensitivity, the fire ants can kill. It is said that about 5% of those who report being bitten by a fire ant die due to anaphylactic shock. Of course this is very far and in between, but there are reports of deaths caused by an allergic reaction to the venom.
Posted by Anonymous at 1:30 AM